The Value of Consistency of Effort

Leaders obviously have to be concerned with success, if for no other reason just to keep their job! I just read a quote about success that I had never seen before but I thought it was very insightful for leaders. See what you think:
Success is never owned.
It’s only rented.
And the rent is due everyday.
Like so many other maxims, the author is anonymous. Whoever Mr. Anonymous is he sure was responsible for a great deal of thought-provoking writing.
As I reflected on this adage and on success, five concepts emerged. 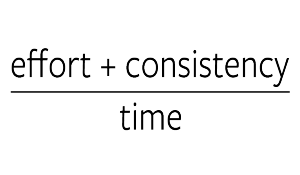 John Wooden, the legendary UCLA coach, had two interesting thoughts on success. Both revolved around work. First, he often said, “There is no substitute for hard work.”
He then followed that up with, “There are no shortcuts.” When I considered the most successful people I have ever known both of these insights were certainly true for them. Everyone of them was a consummate worker.
Through a number of my years in coaching I said that the key to being a great athlete was effort. The more I thought about effort, I came to realize that I was wrong. I saw too many athletes who could give a great effort on Monday, Tuesday, and Wednesday but for some reason they could not find that same effort on Thursday, Friday and Saturday. The same was true for the leaders I worked with.
Therefore,  I concluded that effort was not the key to success and that the difference between a good athlete or a good leader versus a great athlete or leader is not effort. Rather, it’s Consistency of Effort. The great ones somehow find the best they have each day. None of us have our “A” game everyday; but the great ones consistently find the very best they have that day everyday.
I also believe that some things may not be able to be taught but they can be caught. The Consistency of Effort on the part of a leader can definitely be caught by the people he is leading.
The third thought I had on success was Teamwork. Very little was ever accomplished by a leader who did not have a great team behind him. In The Seven Habits of Highly Effective People, Stephen Covey wrote that as a business consultant he found three types of people in the businesses he worked with – dependent, independent, and interdependent. He then wrote the best businesses he consulted with developed interdependent people. To achieve the highest success possible we need all in the organization working together and appreciating the work of their fellow workers. In concert with that, there is no job that is too small.
Another aspect of teamwork was stressed in the book, From Good to Great. Jim Collins took teamwork to another level when he wrote that a leader had to get the right people on the bus. But this was not enough. He also had to get the right people in the right seats on the bus.
When the Fortune 500 companies did a survey on what characteristics they looked for in the hiring process, they arrived at 13 assets and listed them in order of importance. Concepts like critical thinking, problem solving, and presenting were among the 13, but the number one characteristic they wanted was teamwork. They wanted people who could come in and be part of a team.
The fourth concept concerning success ironically is failure. I think that most successes have experienced some failure along the way and that it is critical that a leader develop a strong FQ, a strong Failure Quotient. Pat Riley, the former Los Angeles Lakers coach and current Miami Heat president, addressed this succinctly when he wrote in his book, The Leader Within, “Success is getting up one more time than you’ve been knocked down.”
Leaders do fail; but strong leaders get right back up.
The final thought on success is something leaders have to constantly be aware of –  arrogance, cockiness, or the big head. Leaders can get full of themselves and think that all the success is strictly of their doing. The success validates that they have all the answers. To avoid this pitfall they might want to accept John Wooden’s sage advice:
Talent is God given, so be humble.
Fame is man given, so be thankful.

But conceit is self given, so you better be careful.

Related posts
Laser Focus with Purpose
July 26, 2021
Gene and Gene
January 25, 2018
The Value of Team Ego
December 26, 2017
Legacies and Leadership
December 18, 2017
4 Areas Where Great Leaders Separate Themselves From Average Leaders
November 14, 2017
Everybody Gets a Trophy
November 6, 2017
Leave Comment
Testimonials
Newsletter Sign Up
Follow Pat
Pat would love to hear from you.