Everybody Gets a Trophy | Learning From Failure | Coach Pat Sullivan

Everybody Gets a Trophy

There has been a great deal written criticizing this relatively new concept of everyone getting a trophy. I am not in favor of it for one reason – Failure. 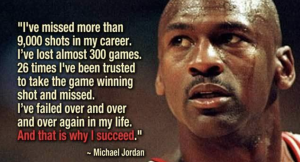 Failure is a part of life. I believe all of us meet Failure in our lifetime – both personally and professionally – and the sooner we learn how to deal with it the better.

So, instead of teaching young people that we all deserve rewards, thereby not hurting anyone’s feelings, I believe we would help them more by teaching them how to deal with Failure.

One of the most profound concepts I ever heard at the many basketball clinics I attended both nationally and internationally came from Dale Brown, the former LSU basketball coach. After telling a story about a woman who overcame tremendous odds, he said your “FQ is more important than your IQ.”

Your FQ is your Failure Quotient. How often can you fail at something and have the resiliency to get back up?

When you study the lives of great achievers, you see an awful lot of Failure. Abraham Lincoln lost many more elections than he won prior to being elected president of the United States. Thomas Edison failed 10,000 times in his experiments to find electricity until he finally met with success. When Winston Churchill, possibly the greatest leader of the 20th century, flunked 6th grade his teacher wrote that he was “dumb and hopeless.”

Each of these three men had strong FQ’s. Most, if not all achievers, have met or will meet Failure along the way.

If the above premised is true would it not be better to teach young people how to deal with Failure? The field of cybernetics teaches two ways to meet Failure:

It is relatively easy to learn from Failure but more difficult to put it behind you. The best analogy I heard to accomplish putting Failure behind you was to have a big box with a huge, strong lock. Put the Failure in the box, lock it tightly, never open it up, and move on.

Leaders must learn to deal with Failure. If they have been given trophies all their lives, Failure very well may consume them. However, if they have been taught to develop strong FQ’s they will be in a much better position to lead.

Pat Riley, the former Los Angeles Laker coach and current president of the Miami Heat, summed up the importance of a strong FQ in his book, The Winner Within: A Life Plan for Team PLayers. He wrote, “Success is getting up one more time than you’ve been knocked down.”

Trophies are great but learning to deal with Failure is the better life-long gift.

Related posts
Laser Focus with Purpose
July 26, 2021
Gene and Gene
January 25, 2018
The Value of Team Ego
December 26, 2017
Legacies and Leadership
December 18, 2017
4 Areas Where Great Leaders Separate Themselves From Average Leaders
November 14, 2017
Zobrist Gets “It”
October 3, 2017
Leave Comment
Testimonials
Newsletter Sign Up
Follow Pat
Pat would love to hear from you.