4 Areas Where Great Leaders Separate Themselves From Average Leaders

I recently heard an expression from John Maxwell that I had never heard before that made me reflect on its wisdom. 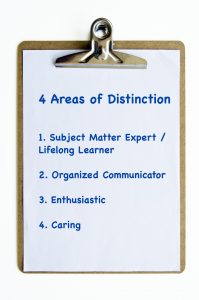 I know we see this in the athletic arena. When we have excellent teams, we attract bigger crowds. Although people won’t pay for average, they will pay for excellence.

This is a great lesson for leaders. Whatever business, team, or organization you are leading, the more excellence you produce the more success will come your way.

I do believe in the last analysis all leaders are both teachers and coaches. I once heard that the best definition of a teacher is a one-word definition. That word is “Facilitator.” The great teachers facilitate the learning; they make the learning easier.

Please think of the BEST teacher or coach you ever had – not a good one, the BEST. For that teacher/coach to achieve excellence, I think he/she had to do four things. Did your best teacher/coach do these four things?

First, he/she knew his/her subject matter, be that subject algebra or football. The great UCLA basketball coach, John Wooden, had this insight on learning. He told a friend of mine who played on his last team how much he was still learning about the game. At the time, he was 65 years old.

Coach Wooden’s teams won seven NCAA basketball championships in a row and in the last twelve years he coached they won ten. I don’t think either of those records will ever be eclipsed. Coach knew his subject matter and he was a lifelong learner. Great teachers, coaches, and leaders are lifelong learners in their subject matter.

Second, the teachers/coaches who achieve excellence are organized. They can disseminate their knowledge. Unfortunately, some of you may have had professors who definitely knew their subject matter, but they could not bring it down to our level, to the level of us mortals.

I have always liked this concept from the athletic world: “I have not taught until you’ve learned.” Great teachers, coaches, and leaders adhere to this adage.

Third, the great ones teach, coach, and lead with enthusiasm – not the “rah rah” enthusiasm; but the quality of enthusiasm where they are enthused because you did so well.

Fourth, finally, and most importantly, the great ones CARE. They care about the people in their charge far beyond the narrow confines of a classroom, a football field, or a place of work.

The greatest example of this in coaching was Amos Alonzo Stagg. He was the football coach at the University of Chicago when they were in the Big Ten Conference. His degree from Yale was in Divinity. He studied to be a Reverend but he felt he could better minister to America’s youth from a football field than a pulpit.

Leaders are teachers and coaches and there may be value in reflecting on the four things above that the great ones do on a daily basis. Hopefully, you will catch excellence!

I would love to hear about your experience with a leader that was above remarkable in these four areas. Was she / he a subject matter expert – lifelong learner, an organized communicator, enthusiastic, and did she / he care?